The Pound-to-Canadian Dollar exchange rate was trading near its highest since April following a flurry of demand for Sterling, while BMO Capital Markets has suggested that levels around 1.73 should now be viewed as short-term buying opportunities.

Sterling has staged what appears to be a decisive break free from a two-month range that was ignited last week by a retrenchment of the Canadian Dollar and furthered in recent days by a strengthening of the Pound.

The Pound strengthened broadly on Thursday following indications from two rate setters that risk management considerations relating to inflation could lead the Bank of England (BoE) to end its emergency quantitative easing programme as soon as its August policy decision.

“On the whole, the risks are tilted towards the BoE element becoming a bit more supportive for the GBP; we would look for short-term buying opportunities in GBPCAD in the vicinity of 1.73,” says Stephen Gallo, European head of FX strategy at BMO Capital Markets.

The BoE has bought around £90bn of government bonds since announcing in November 2020 that it would purchase £150n before year-end 2021, though this was at a time when the UK had just entered its second ‘lockdown’ and risks to economic growth and inflation were on the downside.

Since November the economy has reopened and its recovery is so-far stronger than was expected by many, while the inflation the BoE is charged with managing through its monetary policy has risen sharply, and is expected to rise further before any return to the bank’s 2% target.

“The firmness of energy prices and BoC/BoE divergence has anchored GBPCAD relative to GBPUSD this year. We see scope for that gap to narrow if the BoE tilts more 'hawkishly' and WTI crude remains below $76/bbl (short-term),” BMO’s Gallo says. Above: Pound-to-Canadian Dollar rate shown at daily intervals alongside USD/CAD.

The Pound-to-Canadian Dollar rate briefly traded around 1.74 on Thursday after declines by the Loonie lifted it above 1.73 on Wednesday when the Bank of Canada (BoC) said nothing in its July decision to encourage or vindicate market expectations of an interest rate rise in the first half of next year.

While the BoC did go ahead with a widely-anticipated reduction to the amount of government bonds it purchases each week, its forecasts suggested the bank expects that elevated inflation numbers seen recently - and anticipated for the months ahead - will fade of their own accord during 2022.

This saw the main Canadian exchange rate USD/CAD extending a rally that had been in progress since the prior week when oil prices fell heavily and some indicators of U.S. economic activity suggested the pace of recovery in the world’s largest economy may have peaked in June.

“That messaging implies that there are risks to what the June 2022 BAX contract is pricing in. Right now, it’s around ~30bps of tightening. Naturally, if the BoC sticks to its guns, that contract has more room to rally. For USD/CAD – a rally in BAX portends to further upside,” says Bipan Rai, North American head of FX strategy at CIBC Capital Markets.

Increases in USD/CAD most often tend to have an uplifting impact on GBP/CAD because the latter always closely reflects the relative performance of the main Sterling exchange rate GBP/USD and Canada’s equivalent CAD/USD.

This means CIBC Capital Markets’ target of 1.2630 for USD/CAD is another potential feather in the cap of the Pound-to-Canadian Dollar rate.

Canada’s Dollar had previously been the best performing major currency of 2021 until GBP/CAD’s Thursday climb above 1.7380, its starting level for the current year, which had enabled the Pound to slip tentatively back into the lead by Friday.

The Pound-to-Canadian Dollar rate would trade near the 1.75 handle if USD/CAD reached CIBC Capital Markets’ 1.2630 target and at the same time the main Sterling exchange rate held around Friday’s 1.3850 level. Above: Pound-to-Canadian Dollar rate shown at weekly intervals alongside USD/CAD. 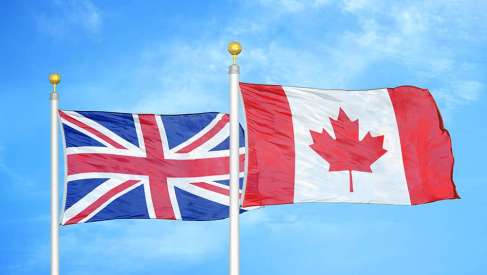 "It is difficult to see the light in the tunnel for GBP," says Swedbank.

Economists at NBC have updated clients with their latest Canadian Dollar forecasts.

Pound to Canadian Dollar Week Ahead Forecast: Upside Risk Ahead

The Pound to Canadian Dollar exchange rate rallied from August lows to open the new week but could climb further up ahead and as far as a short distance above the 1.58 handle if the Loonie builds on Monday’s declines in what will be a busy period for Canadian, UK and U.S. economic data.

The Canadian Dollar was one of the biggest losers of the midweek release of softer-than-forecast U.S. inflation data.