A surprisingly strong set of Canadian inflation data will fuel investor expectations for a more aggressive interest rate hiking policy at the Bank of Canada, in turn shoring up support for the Canadian Dollar.

Canadian consumer inflation rose 7.7% year-on-year in May, the largest yearly increase since January 1983, and up from a 6.8% gain in April said Statistics Canada.

Excluding gasoline, the CPI rose 6.3% year over year in May, after a 5.8% increase in April, highlighting the broad-based nature of the inflationary jump.

"The Bank of Canada will have to go with a 75bp hike now. Disregard the Fed, even on a basis of just optics, they need to come and set their stall out following this inflation report. The snow has melted and it's getting hot in Canada right now," says Simon Harvey, Head of FX Analysis at Monex Europe. Headline inflation rose by 1.4% month-on-month and the average of the Bank of Canada's three core measures rose further from 4.4% to 4.7%.

Grantham notes inflation was already running well ahead of the Bank of Canada's (BoC) April projections prior to today's release, and is now even further ahead.

"The higher than expected inflation figure will have markets pricing an even greater probability of a 75bp hike in July," he says. The data and expectations for further BoC interest rates hikes will underpin a bid under the Canadian Dollar which is the second-best performing major currency of 2022.

The Canadian Dollar has been boosted by a combination of elevated oil prices, a roaring U.S. economy on its doorstep and an active BoC which has guided bond yields higher using an activist interest rate policy.

However it won't be a smooth rise higher for the Canadian Dollar which also remains subject to global market sentiment, which continues to struggle amidst fears that rising central bank interest rates will choke growth.

"While the highest inflation since January 1983 keeps the Bank of Canada on track for a rate hike as large as 75 basis points next month, many remain on edge that a synchronized spike in lending rates could deal a significant blow to the world economy, a theme pressuring commodity currencies," says Joe Manimbo, a currency analyst at Western Union.

Major U.S. stock indices this month entered a bear market which means the default direction of travel will be lower.

"Recession concerns are weighing on risk assets in a significant way," says Shaun Osborne, Chief FX Strategist at Scotiabank. "There is no specific trigger for the wave of risk aversion beyond various bank economists advancing recession scenarios and odds as central banks push ahead with aggressive policy tightening steps."

This combined with a broader slowing global economic growth pulse will likely weigh on high-beta currencies such as the Canadian Dollar, particularly against the U.S. Dollar.

However, the currency is likely better positioned than other non-USD peers given Canada's energy production base.

It is for this reason that strategists at RBC Capital Markets continues to recommend a sell rating on the Pound to Canadian Dollar exchange rate (GBP/CAD).

"We still like this trade, which is currently up around 8%," says Adam Cole, Head of FX Strategy at RBC Capital.

A theme of central bank divergence informs this trade: as the Bank of Canada pushes hard on the accelerator the Bank of England is easing off.

This creates a bond yield divergence that tends to work against GBP/CAD.

"Since the May MPC meeting, markets have started to price out UK rate hikes relative to the rest of the world, after the BoE slashed its 2023 growth forecast to below zero and its long-term inflation forecast to below target," says Cole. 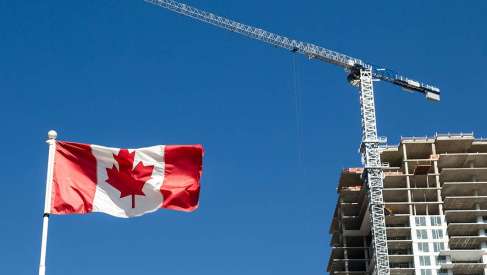