We are on course for the third week of losses in a row for the EUR to USD conversion - where will the selling pressure end?

The euro has been under pressure against the US dollar for three weeks now with a break through key support at 1.1220 occurring in the wake of the two year US-EU rate spreads continuing to push wider.

They have gone out by around 15bp since the start of last week confirming that interest rate differentials between the United States and the Eurozone remain the driving force behind EUR/USD.

Concerning the immediate outlook it is worth pointing out that the pair is yet to trade below 1.12 as profit taking appears to be stemming near term downside.

1.12 is therefore expected to aid the euro over the short-term with good buying interest being seen at this level.

“However, technical studies suggest that we should extend towards 1.1144, taking the cross through the 100-day in the process,” says Jeremy Stretch at CIBC.

While 1.12 is the number to watch over coming days, if we turn our gaze to the next two weeks the 1.10 target comes into view as we anticipate further US dollar strength to be a feature of global markets over this time frame.

With market pricing for a June interest rate rise shooting up from 4% up to 30% - if this moves yet higher expect the dollar to move alongside.

“The post-FOMC appreciation has been fully balanced, and on any signals pointing to a fed funds rate hike already in June (the Fed meeting will be held in less than a month, on 15 June) the euro should correct further, heading towards 1.10,” confirms  Asmara Jamaleh at Intesa Sanpaolo in Milan.

To be fair, the next big trigger for such a move would likely be the next set of payroll figures, always due on the first Friday of each new month.

While the euro could eke out strength, ultimately it should keep knocking on 1.12.

“FX has a tendency to over-shoot in such an environment and so while bond markets are arguably more correctly priced now, we still see room for the EURUSD to push towards trend line support in the 1.1090 region,” says Robin Wilkin at Lloyds Bank.

Lloyds are expecting that area to hold for another correction phase. 1.1290/1.1330 is intra-day resistance, with a move back through here negating the immediate downside momentum and shifting us technically into a neutral, range trading state of play.

Looking to the long-term we note that the current weakness is compatible with the view that the euro should ultimately strengthen.

The decline is minimal when we consider the pair started the year towards 1.08 and the uptrend from these lows remains intact if you were to look at the charts from a certain angle.

What is of interest to us though is that the European Central Bank is unlikely to ease policy (cut rates, increase asset purchases) again in the current cycle.

Without this kind of action we would expect those rate spreads that we mentioned at the start of the article to ultimately compress.

The central bank’s recent communications hint at a shift from its previous obsession with the exchange rate.

“We believe that the ECB has – rightly – stepped back from talking the euro down and in terms of monetary policy action we think that it is pretty much done,” says Dr. Vasileios Gkionakis, Global Head of FX Strategy at UniCredit Bank.

Rather, the ECB will likely concentrate on credit easing as it would be a more effective channel to boost the Eurozone economy suggests Shahab Jalinoos, Head of Global FX strategy at Credit Suisse:

“In our view the key catalyst for the reversal was ECB chief Draghi's suggestion that the ECB is close to the end of the road in terms of pushing further on negative rates as a policy tool.

“We have argued a shift in the policy mix for further easing away from negative rates (previously seen as targeting a weaker currency as a key objective) towards credit easing can be viewed as a potential positive for the EUR.”

This should aid the euro higher towards the end of the year. 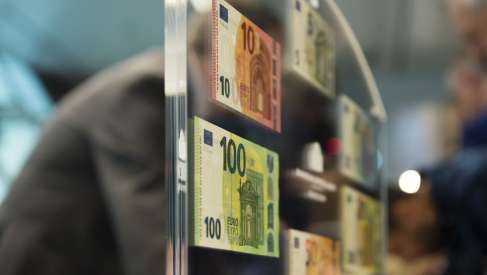